Many still use the older driver as it still works on Windows 10. It works with most of the cheap generic headphones on the market. These are mainly Chinese products which use the same software. They dont however give a driver with these and Windows does not do a good job at connecting them to the computer. This is the IVT Bluesoleil bluetooth driver.

This is what it looks like on a Windows 10 system. Its called BlueSoleil Space. From there you can search for your wireless devices. Most times the headphones tend to only have a number or the better brands will show the brand.

The BlueSoleil  Bluetooth has been used in thousands of devices since 1999 when IVT Corporation brought their products to market. Hence why its called the IVT Bluesoleil bluetooth driver. Today many of the generic Bluetooth devices still use this and the reason why there is a generic driver. Their products span many products. Even the Eminent company uses their hardware and drivers.

The primary function of the product has always been to connect your computer to a Bluetooth device. Your mobile phone with its Bluetooth could very well be using the same hardware. You would be able to make a backup of your phone to the computer. Before you connect however the device would ask you to pair the device and ask permission that the device connects to your computer. See also the Bluesoleil generic Bluetooth driver Windows 10 below.

The BlueSoleil Generic Bluetooth driver as we have here is the latest version of the driver as well as the older one. There are s 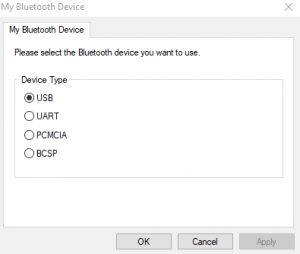 The current driver is made for Windows 8, 8.1, and 10. If you have a Windows 7 or Windows XP machine then try the older driver. The newer driver however caters for Bluetooth 4.0 while the older one does not.

Note that the BlueSoleil Bluetooth driver will work on most device today. Depending on your hardware and operating system. There is the USB option as well as the UART option when connecting to other devices which use the UART protocol. It can also use the PCMCIA device which is still on the market.  You can make these choices in the bottom bar on your computer and set the software to connect to certain protocols. There are a total of 4 network protocols. The most common is the USB usage. This is the Bluesoleil Bluetooth driver Windows 10 as can be seen below. See also the BlueSoleil Nexxt NW200NXT03 Driver on here.

The drivers have been included in Microsoft since Windows Vista, however there are many who are using older computers or those who do not wish to update their Windows operating system. Hence the BlueSoleil Bluetooth driver being shown below. The limited version or demo version of BlueSoleil is limited to 2MB transfers. This is the demo version of the software. The older driver is from the old Eminent hardware. If you are looking for the IVT Bluesoleil 1.6 driver then it is on the link here. You can also find the Bluesoleil Bluetooth 5.0 driver below as an option.

I develop websites and content for websites related to high tech from around the world. See more pages and content about technology such as USB and other IT developments around the world. You can follow the other websites as well and search this website for more information on mobile phones and other USB components.
Previous FA706QR ASUS TUF WLAN Driver
Next FA706QM ASUS TUF Driver