The driver software was designed to work on the Windows XP (SP3 or greater) as well as the Windows Vista, Windows 7 and the Windows 8 operating system. You can also run this on Windows 10 in the emulation mode. It also works with devices running Android, Motorola OS as well as the Windows Mobile operating systems. This is the latest driver and software for the Motorola being Version 2.5.4 which is located below for download. This will work on Moto E and Moto G mobile phones or any other version of the Motorola family of mobile phones.

Installation of the Motorola Manager

Note that this download is licensed as freeware by Motorola for the Windows (32-bit and 64-bit) operating systems. This can be on a laptop as well as on a desktop computer from mobile phone tools. The Motorola Device Manager here as stated before is the version 2.5.4 which is available to all software users as a free download and released in March 2015. 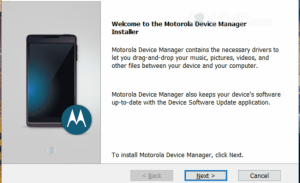 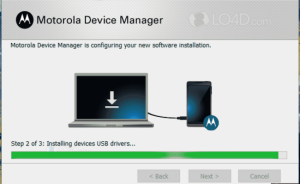 Download the file below and then extract the file inside. Click on the install file and the device manager will install and that is easy enough to understand. See below as to how this installation is done. If it will not run on Windows 10 then extract the installation file and then right-click on the EXE file and then click on ‘install’. Windows 10 will then install it in compatibility mode. This is similar to the instillation of the UART port for the ft231x usb uart driver and driver prolific usb-to-serial comm port which is also on here.

I develop websites and content for websites related to high tech from around the world. See more pages and content about technology such as USB and other IT developments around the world. You can follow the other websites as well and search this website for more information on mobile phones and other USB components.
Previous Sony Xperia Z USB Driver
Next Sony Xperia ZL2 driver